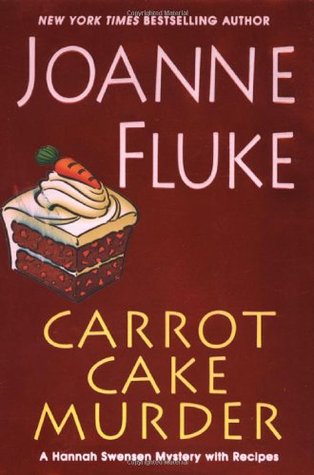 I thought the story wasn’t that good and very under developed. And that the author went for an easy ending, instead of creating something that made sense and was actually mysterious.

This was extremely lackluster and boring.

But review I must.

So it is summertime and Lisa and Herb are having a big family reunion, inviting every single relation. It is a huge affair and Hannah, her family, and two boyfriends are also joining the crew.

One person that Herb’s mom Marge’s long-lost brother Gus who took off years ago never to be found, ends up showing up to the party.

He  said he was just in the area and happened among some flyers and thought he would join the group. He has a a lot of money and fancy suits.

However, at the reunion a lot of old hurts come up. Gus was a master manipulator, a borrower and not returner, and a blackmailer. He has a lot of people that he has upset over the years.

He asks Hannah for her special carrot cake as he just loves it, and Hannah gives him a whole one.

The next day no one can find Gus for the group picture, so they of course send Hannah and she finds the dead body.

So let’s start with what was wrong in this book.

A) If It Is Such a Big Party With So Many to Feed, Why Are Hannah & Family & Boyfriends Included?

I know that Hannah and such are great friends of Lisa and Herb, but it seems weird to invite so many non-family members to a family event. I mean it is not just a few people but Hannah, her sister Andrea, her husband Bill, their two children, Bill’s mother, Hannah’s mother Dolores, Hannah’s sister Michelle, Michelle’s boyfriend Lonnie, Hannah’s boyfriend Mike, Hannah’s boyfriend Norman, and Norman’s mom.

Do they really need a dozen more people, at a family only event? No. And Hannah is helping to cook means she should come, yeah her but why are there 11 extra with her? It is just another plot by the author to have Hannah a part of everything that goes on in her town.

B) Gus Just Happened To See the Reunion On A Flyer

Why do they have flyers to a family only event that they sent marked mailers to? You are not expecting the whole town to come, why paper the streets?

Sometimes I feel as if Fluke is paid by the word or something. She is constantly derail on the weirdest subjects, weird as in THEY HAVE NOTHING TO DO WITH THE PLOT! I’m tired of it, please STOP!!!!

I’m pretty sure in every, single book the person dies eating Hannah’s food. All I can think is why hasn’t anyone made the correlation and Hannah have gone out of business already. Eat her signature dish and you might be signing your death warrant.

In almost every book Hannah finds the dead body. It is boring! Come on Fluke, change it up.

In every book Hannah complains about Mike not being a great boyfriend because he won’t let her investigate with him. What do you think Hannah, that any cop would love to have an amateur bungling things and getting evidence illegally. Listen up Hannah, why don’t you become a real cop or private investigator, and then Mike will leave you alone.

Lisa makes a bar cookie she calls Rocky Road Bar Cookies, after the Rocky Road Ice-Cream.  She puts nuts, marshmallows, chocolate, etc.; the same ingredients in the ice-cream. Hannah tries it and says that it tastes like S’mores

What kinda S’mores are you making Hannah? They don’t have nuts. And they have graham crackers in it instead.

H) I Have Never Had A S’More Before

Lisa tells Hannah she has never had a S’more before which makes no sense. Every store that sells food sells the fixing for s’mores. Hershey’s advertises it on TV as soon as we hit May, so does Honey Maid, etc. I cannot believe she has never tried a S’more “because she didn’t learn in girl scouts”. Get real.

As someone who has multiple family members who suffer from the disease, words cannot describe how deeply hurt and offended I am at you even suggesting that, whether it is in jest or not.

J) Randomness That DOES NOT ADD TO THE STORY!

We spend too much time on random acronyms to remember Native American tribes, the Great Lakes, colors of the rainbow. Just stop!

Your Mexican Hotdish isn’t even Mexican. Jack cheese? White rice? Fritos corn chips? Offensive to the Max! If anything it is Tex-Mex. Get it right.

L) Don’t These People Have Jobs?

Man Hannah and Norman spend so much time NOT working I wonder how they can provide for themselves.  I mean Norman just decides to fly to Atlantic City, doesn’t he need to work? Doesn’t Hannah? I mean it is one thing to work investigating around work, but these guys just totally disregard it.

In the last 42 pages we get this big exposition rush about one of Lisa’s relations who is bad at the stock market and wasted away the money, mean to his wife, mad that Gus won’t give the money he borrowed from his wife back, blah, blah, blah. Listen Fluke, you do this a lot and it is horrible. I don’t know if you can’t decide on a killer or feel you need a “twist” for the reader but it is really bad, really bad.

N) If He is So Horrible Why Are You Still Married?

So Peggy is the wife of the murderer and the deliverer of the exposition about how Mac is totally the murderer. You go on about how horrible and threatening he is, why are you still married? Why don;t you leave.

And if you love him as much as you say and act, why are you so willing to give him up to the police. It just didn’t make any sense and felt like Fluke was rushed and just did the ending the night before it was due to print.

O) Ross is Back

This bland saltine of a man is back? Seriously? Come on, just stop. Isn’t it enough you have two guys fighting over Hannah, do we have to include another guy who is blander than a heart patient’s diet?

Hated it. Two out of Five stars.