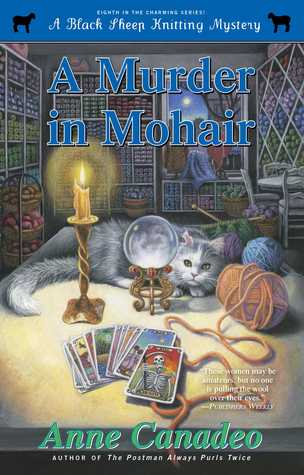 So Plum Harbor has left the Hollywood glitz behind and returned to life as normal.

You know what that means…something is about to happen

It is summer time in Plum Harbor and the sleepy town is rudely awakened with the murder of the local movie theater owner, Jimmy Hubbard.

It appears to be a robbery gone bad, but why of all places would one hit a struggling cinema when there were plenty of other buisnesses in the downtown area that would have more money?

Besides murder, the other thing to hit the town is a psychic, Cassandra Waters.

Cassandra has been helping one their friend Edie’s niece Nora talk to her deceased son. All the women are doubtful of such powers, with their friend Edie coming to them asking if they could observe and let her know how Cassandra gets her information.

The girls decided to hold a psychic/knitting night and see if they can trap Cassandra into revealing her phony self.

In other news Lucy is approaching an important birthday and thinking about her future with Matt. Is she wasting her time in believing that the two will marry have a child together? Should she move on? Or is she getting anxious for nothing?

The knitting/psychic night comes upon the girls and they find it not quite what they expected. Everything said is vague; but at the same time it feels as if Cassandra is privy to privileged information. How does she do it?

One day as Lucy is walking along mulling over her future, when she comes across Cassandra’s home, and sees Richard, Nora’s husband. He’s leaving Cassandra’s house and she is dressed in very little.

Soon after Cassandra is found dead and it is up to the Knitters (minus Maggie as her cop boyfriend does not like her getting involved) to figure out who the killer is. Did someone murder Cassandra because her crystal ball revealed a secret someone would rather keep hidden? And who killed Hubble? Are there two murderers roaming around Plum Harbor or are these crimes connected?

I knew it was only a matter of time before they brought in psychics or the occult. Every mystery series does and the psychic always seems to “reveal” something “crucial” to the mystery. I’m kind of done with it to be honest.

It’s been done TOO many times

This book wasn’t downright horrible but also not downright amazing. I found it to be only okay.

I did like that they brought in a minor character that was mentioned in previous books instead of an old friend we had never heard about. It s always weird when they introduce these new characters that are “old friends” that we are only hearing about now and never hear of again in the future.

The mystery I thought was easily solvable and lackluster.

She still hasn’t topped Til Death Do Us Purl I think that remains the best book in the series. You should definitely check it out.

For more on encountering the spirit world, go to Grave Peril

For more book reviews, go to Fangs But No Fangs