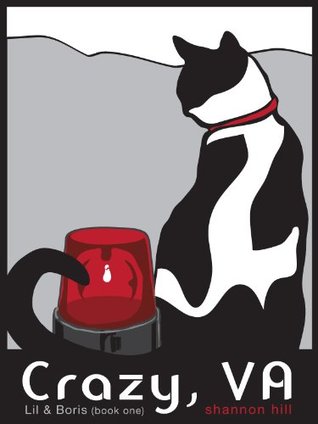 Sheriff Littlepage “Lil” Eller of Crazy, VA must be crazy to live in a town full of her relations who hate her and each other.

For years the Ellers and Littlepages have been having their own Hatfield and McCoy type feuding. All except for one female Littlepage and male Eller who decided to run way together and have a child.

After their death she was raised by her aunt, a pariah from the group, and has hated both factions of her genetic code. She becomes the sheriff and tries to govern a town where most of the population hates her and one used to taking bribes rather than following law and order.

She finds herself heir to millions when an oversight by her grandfather left her in the Littlepage will. Instead of holding onto it, she donates it to the county to be the new home for rescued animals.

Lil is no stranger to rescue animals as the only deputy she can hold onto is a previously abused tomcat, Boris.

Then Crazy has its first murder in ages when Lil’s cousin Lisa Littlepage Hunter is found dead.

This case is extremely difficult as not only does she have to spend time questioning people she can’t stand, but finds herself in one tangled web with people blocking her every which way.

I didn’t like this book at all. It took forever to get to the mystery part, just introduced a bunch of characters without taking them anywhere, and ended abruptly.

The only thing I did like was the character of Boris. After all:

For more cat-centered mysteries, go to The Cat Who Turned On and Off

For more Charles Dickens, go to The Disappearance of Edwin Drood

For more mysteries, go to The Cereal Murders