Ah, Sweet Valley. Nothing takes me back to be preteen years faster than looking at this book series I was completely obsessed with. When I first became interested in them, they were out of print which just made me want them more!

How will I collect them all?

As I kid I really liked the series and wanted to even live in their idyllic Californian world, and I thought the stories were fun and interesting. But as an adult I know they weren’t the best written book. Most of them are cheesy, silly, or sometimes don’t make sense; but these were the ’80s-’90s versions of Gossip Girl or One Tree Hill except with a different type of drama.

So the story follows twin sisters, Elizabeth and Jessica Wakefield. Both are juniors, blonde, 5’6, and size sixes. Elizabeth is the smart, responsible one who dreams of being a journalist or writer. Jessica is the fashionable, social butterfly, cheerleader that dreams of parties and popularity. 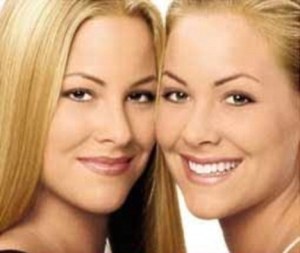 They live in Sweet Valley, near Los Angeles, and attend school with their friends. The first book focused on the two girls, but the later ones were divided into two stories: one about a friend or relative while the other is about the girls. The later series got a bit darker and was done in short series, two or three books that went together. The topics ranged from drugs, sex, school dances, serial killers, sports, werewolves, princes, vampires, kidnapping, stalkers, etc. You know normal teenage girl stuff. 😉

Yes as the series progressed the writers changed, and while I didn’t like some of the alterations I still continued to read and collect (still do so today) the novels. What can I say? They are such a big part of my childhood they bring on a tsunami of nostalgia.

So what does that have to do with us? Well quite a few of the books in the series were mysteries, supernatural, had psycho characters, or other themes that fall in line with this blog.

So the novel series is similar to the Nancy Drew Files were you have a little teaser at the end like a preview, and the book picks up from there. In the last review Elizabeth was kidnapped. Since then Elizabeth (who always lectures Jessica) cheated on her boyfriend with Nicolas Morrow, Tricia Martin’s sister had some trouble, Roger turned out to be Bruce Patman’s cousin and a millionaire, Caroline had a fake boyfriend, Bruce and Regina got together but Regina had to leave for Switzerland, and Jessica and Lila fought over a two-timing guy who turned out to be a drug dealer and threatened Jessica’s life.

Quite a lot. So here we are onto the next book:

Remember in Secrets (Sweet Valley High #2) Enid reconnected with old boyfriend and pen pal George Warren. Well, since then—George has been stepping out on her with her pal Robin, a cheerleader.

But we aren’t supposed to hate Robin, we are supposed to feel bad because they are in “love”. They meet in pilot’s class and “fell” in “true love”. Sorry for the snark, I’ve been reading the blog Snark Valley and it must have been rubbing off on me.

Elizabeth had caught them and made them promise to tell Enid and Allen (Robin’s boyfriend) the truth. George agrees to do so after they go on their first flight. But all goes wrong and they end up crashing in Secca Lake.

George is okay with a bump, but Enid loses her ability to walk and has to use a wheelchair. They are investigating the crash, but George knows it is all his fault as if he was more experienced he would have handled it.

So the mystery is-What caused the plane to crash? Will George date Enid even though he is no longer in “love”? And what about poor Robin?

Usually I do a little synopsis that they provide, but my copy of this is a hardcover and doesn’t have one.

So Jessica has hated Enid since she chose her sister over her, but in this when she discovers that Robin and George were cheating-she totally becomes Team Enid and has all the girls freeze Robin and George out.

“…Jessica really did feel sorry for Enid. She had never thought much of George Warren one way or another-but now she was prepared to see him as a villain”.

I can just see him as a regular guy, then in the next scene wearing a handlebar mustache and top hat to show his evilness…sorry-the snark is just overflowing.

Now some may say this is hypocritical, but at this point in the series she has only had one boyfriend, Bruce Patman, (who cheated on her-maybe that’s why she takes it to heart). She has never cheated as she was never in a serious relationship-she does later-but at this time not a hypocrite. Elizabeth is as she is always cheating on Todd. She always “owes” people a date or some stupid justification.

Anyways, George decides to stay with Enid as she saved his life and lost the ability to walk. No George, no. Don’t do it.

Even though I’m actually in love with another!

This is probably why I love Lifetime movies and such. These books trained me.

George breaks up with Robin, of which when people see his car out front think he is meeting her for a tete-a-tete. Robin becomes so blue she goes off her diet and starts consuming everything.

Enid has to go through surgery and they have no clue what will happen, will she be able to walk or lose her ability forever?

Robin kind of annoyed me, coming from someone who struggled with anorexia I don’t think they dealt with her emotional issues the right way-in how she starts becoming anorexic and develops emotional eating issues.

Robin reaches out to “Everyone’s Best Friend and Always There to Help” Elizabeth Wakefield, but Liz totally disses her. Man you are awful. How dare you say you are a friend and not even care to listen at all.

Liz has a dinner party for herself, Enid, George, and Todd. It is super awkward as George is finding it harder and harder to pretend to care about her romantically when he doesn’t, and Enid is clinging to him tighter and tighter. It makes me think in Couples Retreat when the counselor is talking to Jason Bateman and Kristen Bell.

They are having a dance, I think in almost every book there is a dance or fancy party. I have to stop and say it gave me highly unrealistic views for how high school would be. At the dance it is super awkward and after watching George and Robin, Enid puts it together. But even though she knows he’s be cheating, she wants him and ignores it all.

Elizabeth hatches a plan to “save” Enid and wake her up and use her legs. She borrows Teddy Collins, Mr. Collins’ son, and will have him “drown” until Enid saves him. Only one giant problem with this, Elizabeth is sure that Enid will jump in and save Teddy, getting the use of her legs back. But what if Enid doesn’t save him? What if it isn’t the plan that awakens motion in her legs, but what if she instead has a heart attack as she can’t save Teddy and thinks he is really drowning? Or what if she tries to save him but doesn’t get the full use of her legs and drowns herself? I think Dr. Elizabeth should be sued for malpractice.

But of course it works, and Enid is saved and then she lets George go.

Meanwhile, Jessica’s B story is really sad. She and Lila are taking a gourmet cooking class-which Lila walks out on she was never one for doing “work”. Jessica excels at everything and has a real knack, but because she screws up once her family treats her like crap. In fact, her mom, dad, and sister are pretty awful and condescending to her in this. And then Elizabeth’s all holier-than-thou saying Jessica is awful for being mean and judgmental to Robin when she was the same like a few days earlier. When I read this series as a kid I always liked Elizabeth, but as an adult looking at her, she is full of baloney. Jessica may do some screwed up things, but at least she is honest about who she is. I really felt bad for her in this book-she definitely got the short end of the stick while Elizabeth is the golden child, meh.

No outfits in this one. So let’s move on

The Next Book in the Series:

Another thing I loved about these books is that they were designed like radio shows and TV episodes. They always made sure to leave you with a little preview of what will come next:

[Jessica] had just about enough of her family treating her badly all the time. And since her plan to impress them had been such a miserable failure, she was going to have to come up with some other way of changing their minds about her. Only I better think of something fast, she told herself, tears tricking down her cheeks as she threw herself onto her bed. Because I don’t think I can stand things the way they are around her for another minute!

Jessica embarks on a desperate course of action in Sweet Valley #21, RUNAWAY!

But we will not be reviewing that. The next will be #26 Hostage

For more mystery reviews, go to The Glass Forest