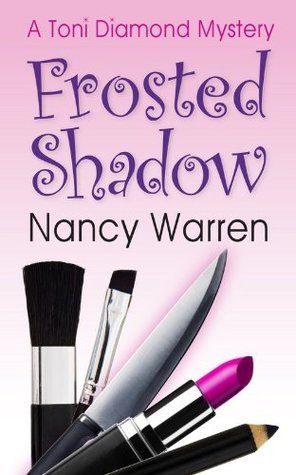 Toni Diamond is a beautiful blonde Texan who has worked her way up from poverty to a great lifestyle, all due to the Lady Bianca Cosmetics.

This Mary Kay makeup line enables women to run their own business and allow any to move up the ranks, rewarding the best saleswomen.

Toni is attending their annual conference, along with being one of the motivational speakers. As she starts her address, she is interrupted with the shock that a Lady Bianca representative was murdered.

Toni heads down with the crowd, but realizes this is not a Lady Bianca rep. She isn’t dressed accordingly, and her makeup is more a free makeover than something she’d be showcasing to prospective clients.

Sergeant Luke Marciano wasn’t looking for civilian involvement, and initially believing that Toni was beauty over brains; he never expected to find himself thrilled at the prospect of her interference.

At first drawn to her outer beauty, he quickly finds that overshadowed by her intelligence and quick mind as she proves to be a powerful ally into the world of Lady Bianca.

The dead women turns out to be suffering from a bad marriage, a lover, and attempt of divorce. She wasn’t even here for Lady Bianca, but a mystery book convention. While the police investigate the victim’s husband, Toni takes a step back and focuses on her team.

To Toni’s surprise and disapproval, she discovers that her biggest rival in the business, Nicole Freedman is pressuring her team into making large purchases, amounts impossible to sell in one month, just so that they can win the prize. After witnessing her browbeating one of her team into submission, Toni speaks out against her.

This unleashes one giant catfight, in which Nicole accuses her of not only trying to sabotage her team, but of sending her threatening anonymous emails.

Toni is confused at that, and after the fight ends she gets a reprimand from the higher ups. A fight and a lecture in the span of a few hours? Toni settles on a walk to calm herself, returning to the hotel late and going to the nearest bathroom to relieve herself.

In the bathroom she notices Nicole’s feet in another stall, telling that it is her by her unique shoes. Not wanting another confrontation, she tries to finish quickly and leave, but notices that Nicole is seated unusually and hasn’t moved.

Going to check on her she discovers that Nicole is dead, she too has been murdered.

Even though they disliked each other, Sergeant Marciano dismisses Toni as a suspect. He believes the two deaths are connected and starts investigating what ties they shared.

Toni decides to do her own investigating, and gets signaled out by the killer. Will she be able to solve the case, or just end up another victim?

I loved this mystery.

Toni works for a Mary Kay type cosmetics company and I love how the author creates a composite of beauty queen with intelligent woman. Diamond is relatable and fun, you quickly being drawn into her life and the mystery that engulfs it.

The mystery was interesting and enjoyable. The only thing I didn’t like was the way they connected the first murder with the second, it was pretty weak to me.

Otherwise, I thought it was a fun mystery and look forward to the next book in the series.