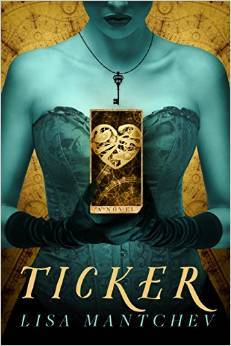 So this book is a science-fiction/mystery/historical fiction/steam punk story. Penny Farthing had a heart problem and nearly dies. Calvin Warwick, a brilliant surgeon and her sister’s boyfriend, creates a clockwork heart to keep her alive, a Ticker.

This Tin Man-esque type creation has turned Penny into the first of the “Augmented”, altered humans. Ultimately, a cyborg.

However, things have changed. Warwick has been killing people in order to create the perfect heart, one that will be even more perfect and able to continue Penny’s life. Since then Warwick has been imprisoned and today will be sentenced for the crimes he committed.

Penny, her brother Nic, and her parents are preparing to go down the courthouse; but Penny is running late to meet them at their family’s factory. Penny is even further derailed when her friend, baker, and brother’s girlfriend; Violet messages her that she is baking her favorite sweets. Penny heads over there before she goes back on track.

Penny hurries over, almost being hit by some other means of transportation. When she arrives at the factory she in for one heck of a surprise. A bomb.

In the aftermath, Penny discovers that Nic was not in the building, and her parents went on ahead. Penny immediately uses her RiPA messaging system to let them know the two are okay, but hears nothing from them.

Nic’s old friend Sebastian Stirling; rich, playboy, and businessman arrives to help out They head over to their house where they discover it has been ransacked and a ransom note left behind. They must give up all the Augmentation research or the parents will be killed.

It is now up to them to find the parents before Warwick kills them.

It was pretty good although there was quite a bit not covered in this. Such as the history of the area, the time it takes place in, how this society works.

I didn’t like Marcus, the soldier that helps them, and didn’t want him as Penny’s romantic lead.

Instead I liked Sebastian Stirling I don’t know why they made him evil.

For more historical fiction mysteries, go to The Alchemy of Murder

For more not in a series mysteries, go The Book of Madness and Cures