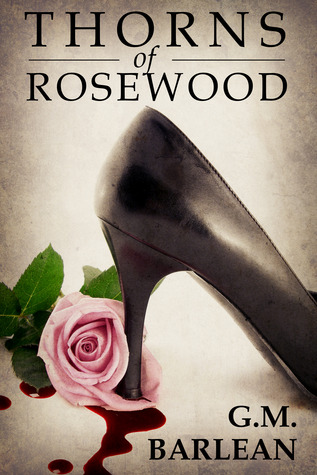 Thorns of Rosewood (The Rosewood Series #1) by G. M. Barlean

In the Thorns of Rosewood, by G. M. Barlean, Gloria Larsen is an intelligent and talented reporter, and she’s out to find her birth mother.

She only knows three things about her mother: she grew up in Rosewood, Nebraska; was over forty when she had her, and gave her up when she was accused of murder in 1974.

Gloria loves her adopted parents, but has always wondered about what really happened with her family. When Gloria comes across the information that Rosewood is looking for a new editor of their newspaper, she jumps at the chance and heads to the small town, eager to find her “real mom”.

However it won’t be that easy, as four women were accused of murdering the judge’s wife, Naomi Waterman Talbot. Which one is her mother? Betty? Debbie? Tanya? Josie?

She’s read numerous reports on the women, but they all seem one-sided and eager to paint the women as villains. But were they? Or were they innocents vilified?

Gloria is eager to find out.

As she looks into whether the women are alive and where they might be, she discovers that they are all still alive and living in a rest home in Lincoln, Nebraska. One hour away.

She journeys out to talk to them.

When she gets there she blows the whole thing. She demands to know their story behind the accusations and gets tossed out.

A few weeks later Gloria calls the rest home back and apologizes telling them the real reason she wants the story, she wants to know her mother. A week later, she gets a call back inviting her to tea.

The women agree to give Gloria a full confession, but only if she promises to publish after their deaths.

It turns out that the women were all in the same class together with Naomi and their friend Mari. Each woman tells a portion of their story, starting in 1950 when they first met Naomi.

Their friend Mari used to date Doug Talbot, who was the son of the most influential man in town. Naomi came to town with her red hair, curvy body, low cut tight fitting clothes, and promiscuous ways. She was with Doug, got pregnant, and married him netting her spot on the top of the social circle.

Naomi had multiple run-ins with the girls as she hated that they wouldn’t play by her rules. She was a master manipulator, inviting Debbie to her reception and then getting her thrown in jail for “assault”.

Naomi is given a position at the bank as Chief Lending Officer even though she knows zip. She also ends up being Tanya’s boss.  Tanya is very intelligent and has worked hard to have a good position, but Naomi makes everyday at work horrifying. She ends up being demoted to teller.

Josie is a teacher, in fact the one who is instructing Naomi’s child. She notices that Doug Junior is very lonely and having some issues. She believes that Naomi is the root of it all. When she tries to talk to her about it, Naomi almost gets Josie fired.

The more time that Gloria spends with the women the more she enjoys their company an who they are. She loves them all, but doesn’t know which she would want as a mother. And she can’t help but wonder if they really did kill Naomi.

This is a very different mystery as instead of having something happen and you try to solve it, we instead get the whole story piece by piece. It is almost more of a regular fiction story than mystery.

And it was a truly compelling read and near impossible to put down.

You should definitely read it for yourself.

For more book reviews, go to Grime and Punishment

2 thoughts on “Thorns of Rosewood”