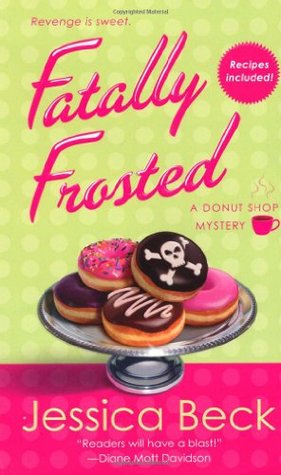 This is the sequel to Glazed Murder, and finds Suzanne Hart once again investigating a murder.

Suzanne has recovered from her previous discovery of a dead body, is currently dating Jake Bishop, North Carolina Police Investigator, and has recently accepted an offer to give demos on her donut making.

Yep, a charity is putting on a kitchen tour; showing the top kitchens in April Springs, with chefs giving demos in each one. Suzanne’s friend Marge has her kitchen in the show and graciously asked Suzanne to show off the beautiful and functional features. Suzanne leaped at the chance as it allowed her free marketing, and the high possibility of more customers to her little shop.

The only downside? Peg Masterson.

Yep, Peg is a mean, gossipy, snobby woman who hates Suzanne and always gives her a hard time.

But Suzanne is determined to have the best demonstrations out of the whole tour. She arrives early to Marge’s, but unfortunately has a run-in with Peg.

Peg’s complaining once again. Ugh. Well, Suzanne just tries to put that behind her and move on.

She gets ready to start, when someone finds a dead body. Peg Masterson

One of Suzanne’s donuts.

Suzanne is once again the main suspect, propelling her into investigating the case. But this time more is on the line than her freedom, it’s her reputation and business.

So at first I found a hard time getting into this novel. It seemed like something I read before.

I can’t think of an exact book, but this seemed so familiar, so much like some other small-town mystery novels.

I also thought that it was quite redundant. I mean the last book she was the main suspect, it seemed a bit cheap to have her number one suspect again.

BUT then, then the mystery got really good. Peg turned out to be playing everyone and skimming off the top of her charity events. Then Suzanne discovers there are many people who want to get rid of Peg, and it is going to be a lot of work to figure out which one actually did her in.

In fact it was in true Agatha Christie fashion. I thought it was one character, but just like the great Dame, Beck had one great twist in her.

I say five out of five stars! 🙂